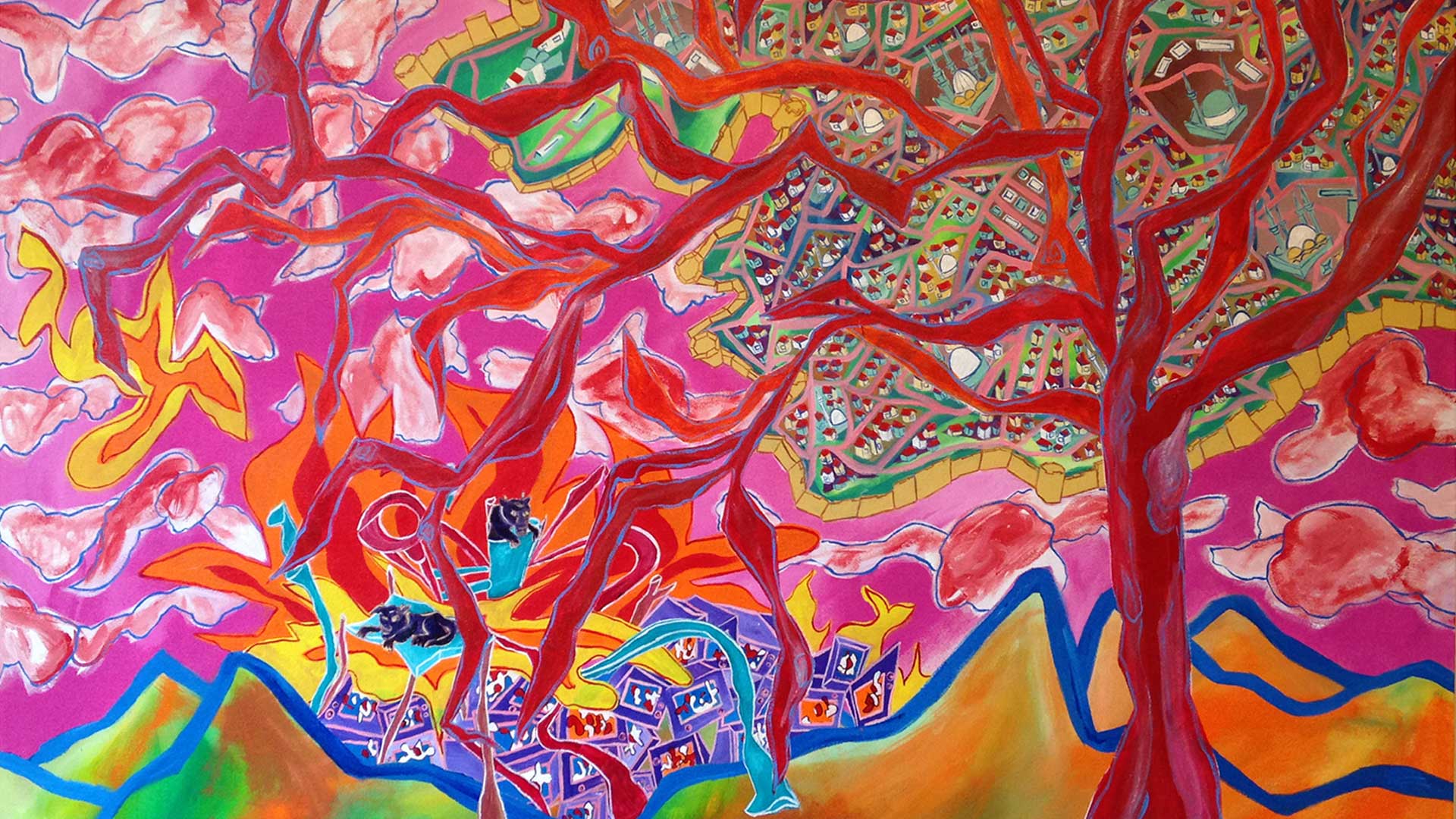 Cinematic Landscapes is a culmination of Kaz Rahman’s time spent in different cities over the last several years that relates both directly and indirectly to his films. Lines carved into wood and overlaying translucently painted images alongside an interplay of dimensions provides a new approach to depth perspective in this recent work (2007-17). His abstraction of form is reminiscent of tangled branches that intertwine and escape off the canvas and lead the eye to explore different directions. Organic movement presents itself through the use of dynamic color that pushes, pulls and draws the viewer into spaces that are continuously flowing while several works use panelling like a puzzle with pieces that do not necessarily fit together but maintain a distinct flow.

The works pulsate with references to miniature paintings from the Deccan and Ottoman eras. Deccani Souls (2007) foreshadows other works by using bold text in a playful, pop style. We are left to decipher words that can connect to form sentences but also intriguingly stand on their own. The words form the bulk of the patterning technique while being guided by organic matter and pathways. Establishing the foundation of color is essential in setting the tone of the work in all of Rahman’s paintings and similarly in his films. There are two distinct color landscapes in these panels; one is green and the other blue, referencing the heavens and the earth. The dichotomy of words such as ‘flowers and garbage’ begs the question whether this is a commentary on the current state of the world and the environment that humans inhabit. In fact, the blurred faces of human forms prove that these issues are at the forefront. We are reminded of old cities whose architecture defines the landscape in Operation Polo (2009) where faceless bodies are piled up amongst ruins and rubble after an invasion in blistering flames that warn us of a view from hell. The subtle nod to an event which took place and had great significance in the history of political Hyderabad and India (and which has subsequently been swept under the rug to silence atrocities committed).

In the series Salaat (2008) a collection of five paintings, we witness a changing of seasons as the five daily Muslim prayers take place. The canvases move in succession as though they are stills from a film, each relating to the other by threads that veer off the canvas and connect to another. This is further achieved by emphasizing the need for one prayer to follow the other and likewise as the seasons must change. These subtle movements through the panels give us a sense of cinematic sequence.

The viewer’s curiosity of what is behind the differing layers that are presented can linger infinitely in works such as Milk Landscape (2014). A playful reference to overflowing mother’s milk and endless feedings that blur the days as they pass in traffic jammed cities and forests connected to each other. A network of transit lines which can be seen in Revolutionary Diner (2013) which is a piece that references American 1950’s pop design (architecturally called ‘Googie style’). The diner is a place of respite from the jungle of subway lines that weave through the Tehran Museum of Contemporary Art. The year of the revolution in Iran unmistakeably invites the viewer to journey through the canvas’ that carefully juxtapose whimsical brush strokes with allusions to a political upheaval. In Hezârfen (2016) we are lead on an adventure by the legendary Ottoman aviator through historic and modern-day Istanbul and across the great Bosphorus. As he flies through the winding city-scape amongst gardens of flowers to mosques that pierce the horizon we are lead to a collection of letters in Roman, Turkish and Arabic script that have collided and fallen into the strait; another innuendo to the political shadow that had been cast over post-Ottoman Turkey.

Rahman’s latest work Black Dogs (2017) is an explosion of aggressive and foreboding crimson hues that lash out at the viewer. Perhaps a continuation of Hazrefen in that the content is influenced by time spent in Istanbul, but on a more personal level, an experience that left a lasting psychological impression. The event of the failed attempted coup in Turkey on July 15, 2016 was something Rahman had to translate onto canvas. While the city of Istanbul is beautiful and majestic, an ominous force lead by vicious black dogs threatens to harm the ancient city. Yet through it all, the city is still intact almost pushing the jinn-like dogs further down into whatever hell they came from as a sense of victory grows out of the flames. The thick outlines of blue and red create inevitable boundaries of where the truth stands and deceit is vanquished. We peer through the branches to glimpse at the profession of faith and stability in the carefully gathered streets and houses cradled with mosques and protected by the old city walls.

Rahman’s films such as Deccani Souls (2012) and Salaat (2010) have influenced the scale of his painting where the aspect ratio of the canvas is a long wide screen and the narrative leads from one end of the piece to the other. He has continued his use of patterns and abstracted imagery in these dreamy narratives and the work often plays out as a cinematic experience with the use of individual panels that can be separated or joined together like the pieces of a puzzle or sequences in a film.

Hedi Hurban is a UK based Music Composer who created the soundtracks for Salaat (2010) and Deccani Souls (2012). 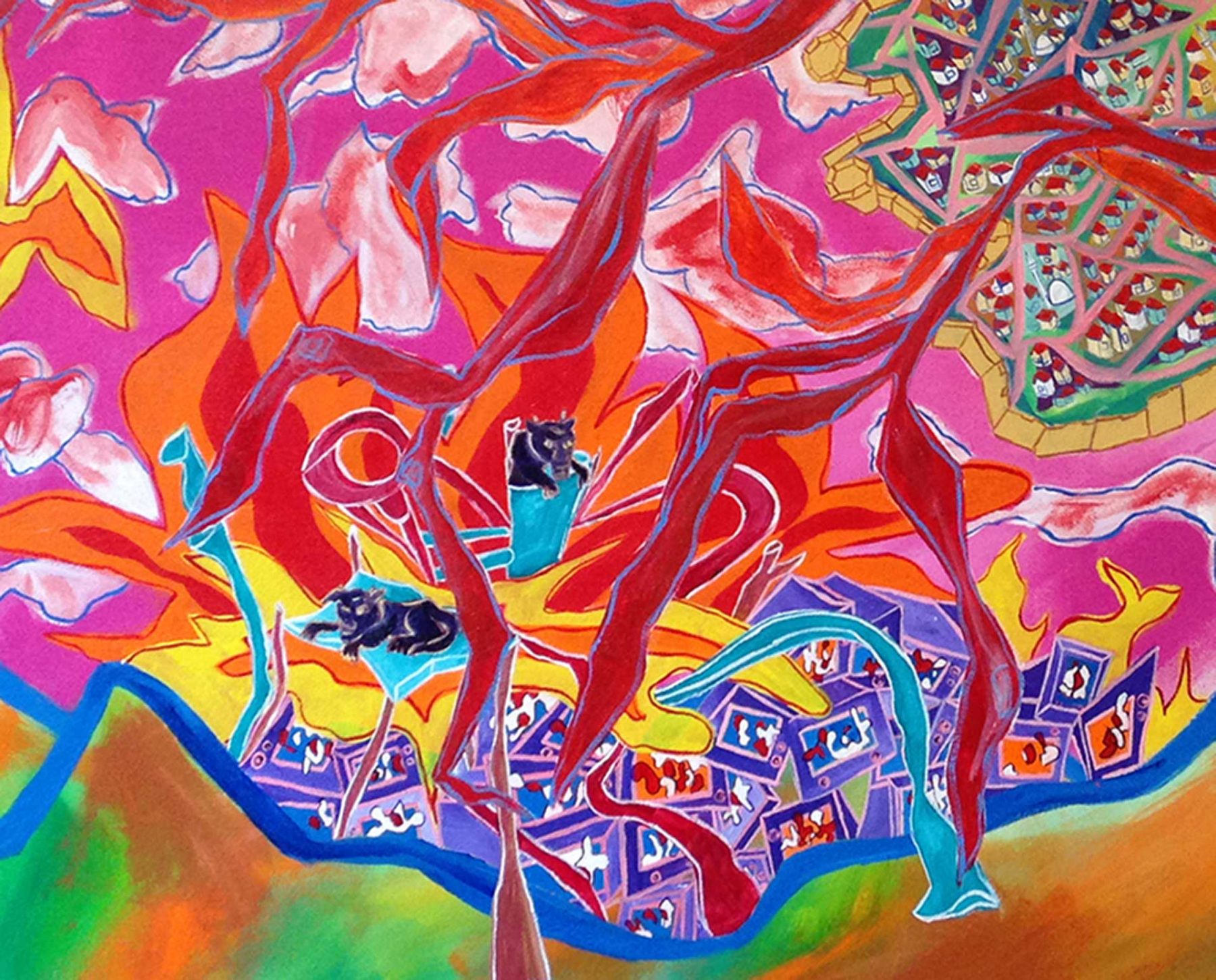 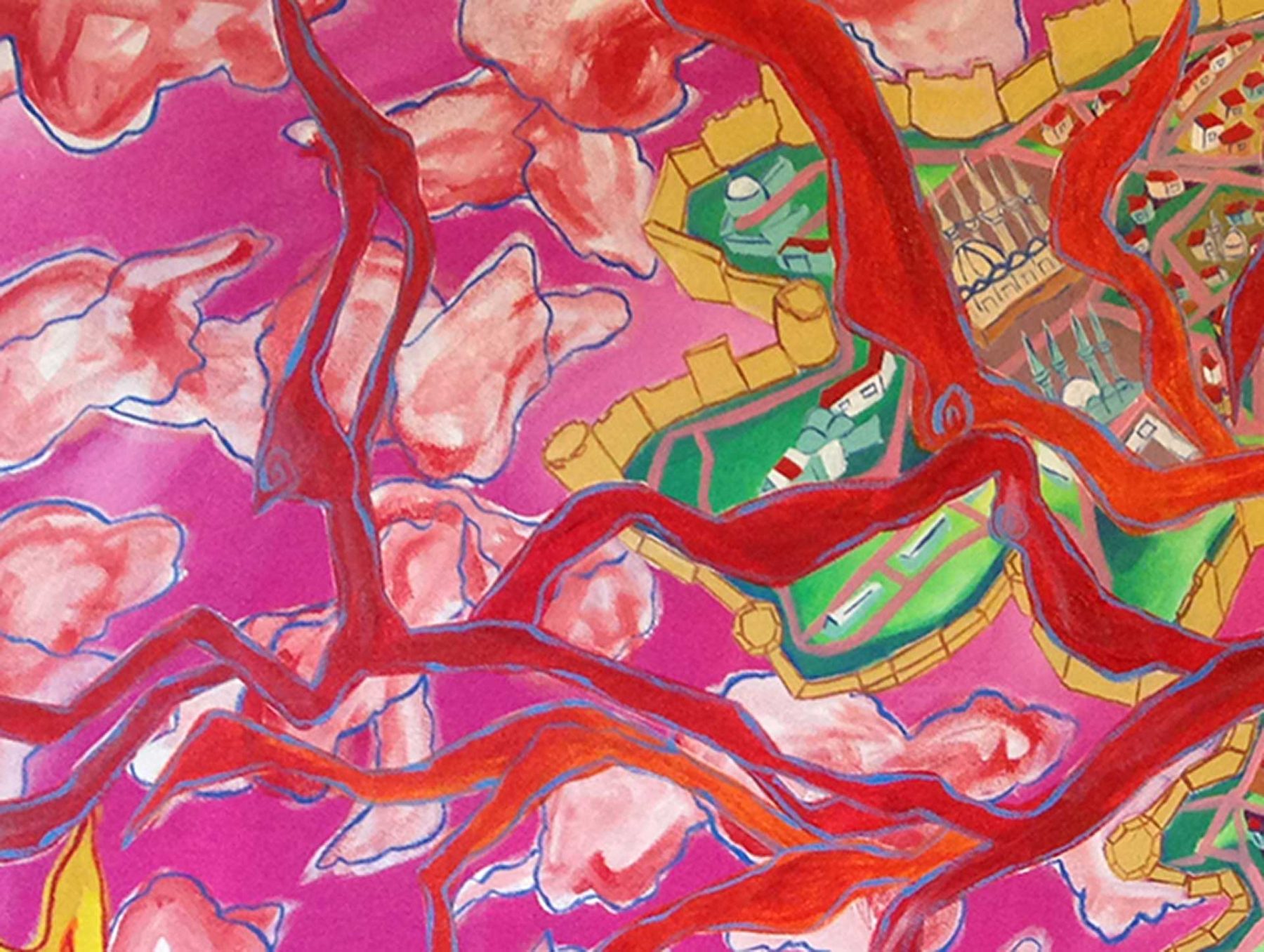 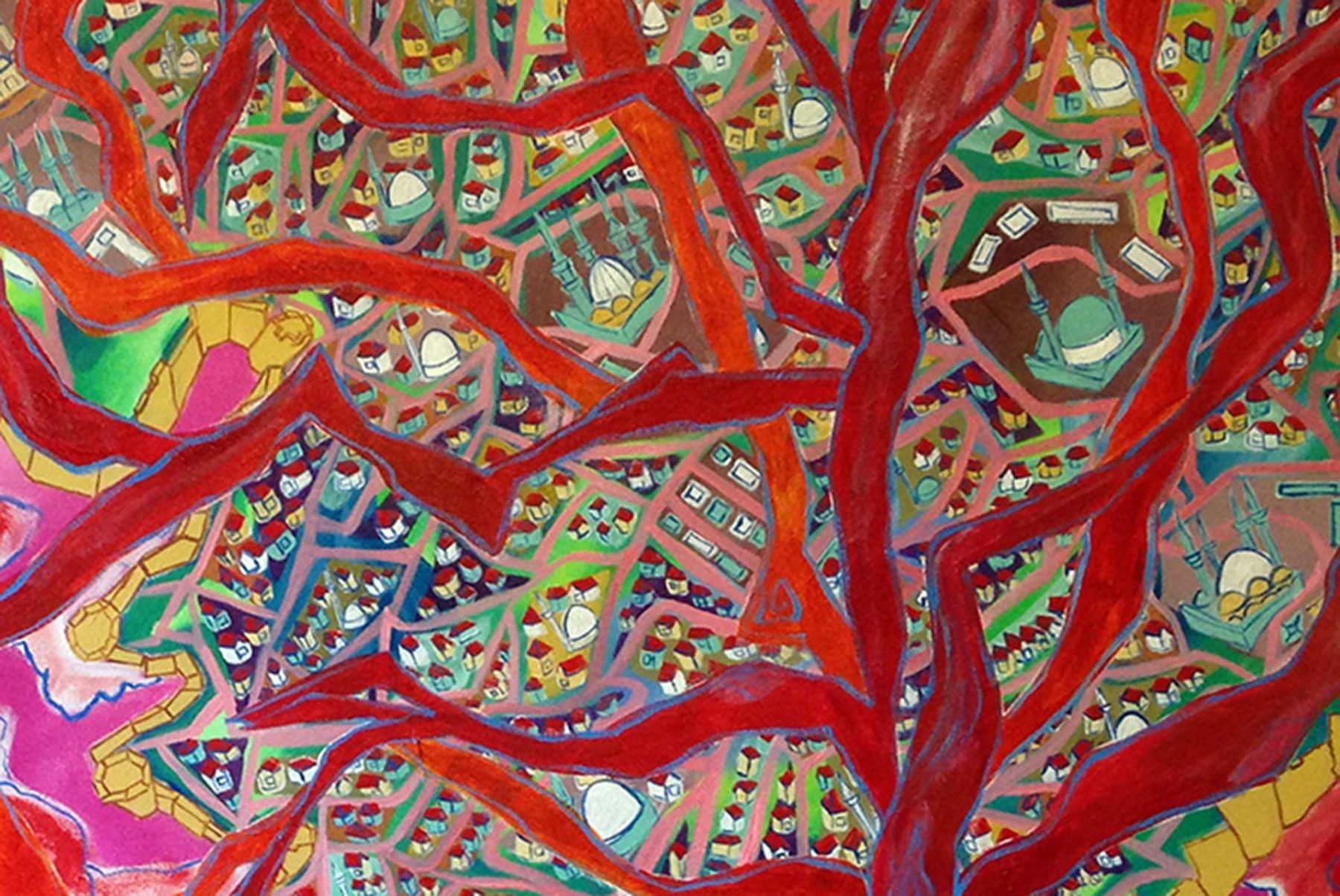 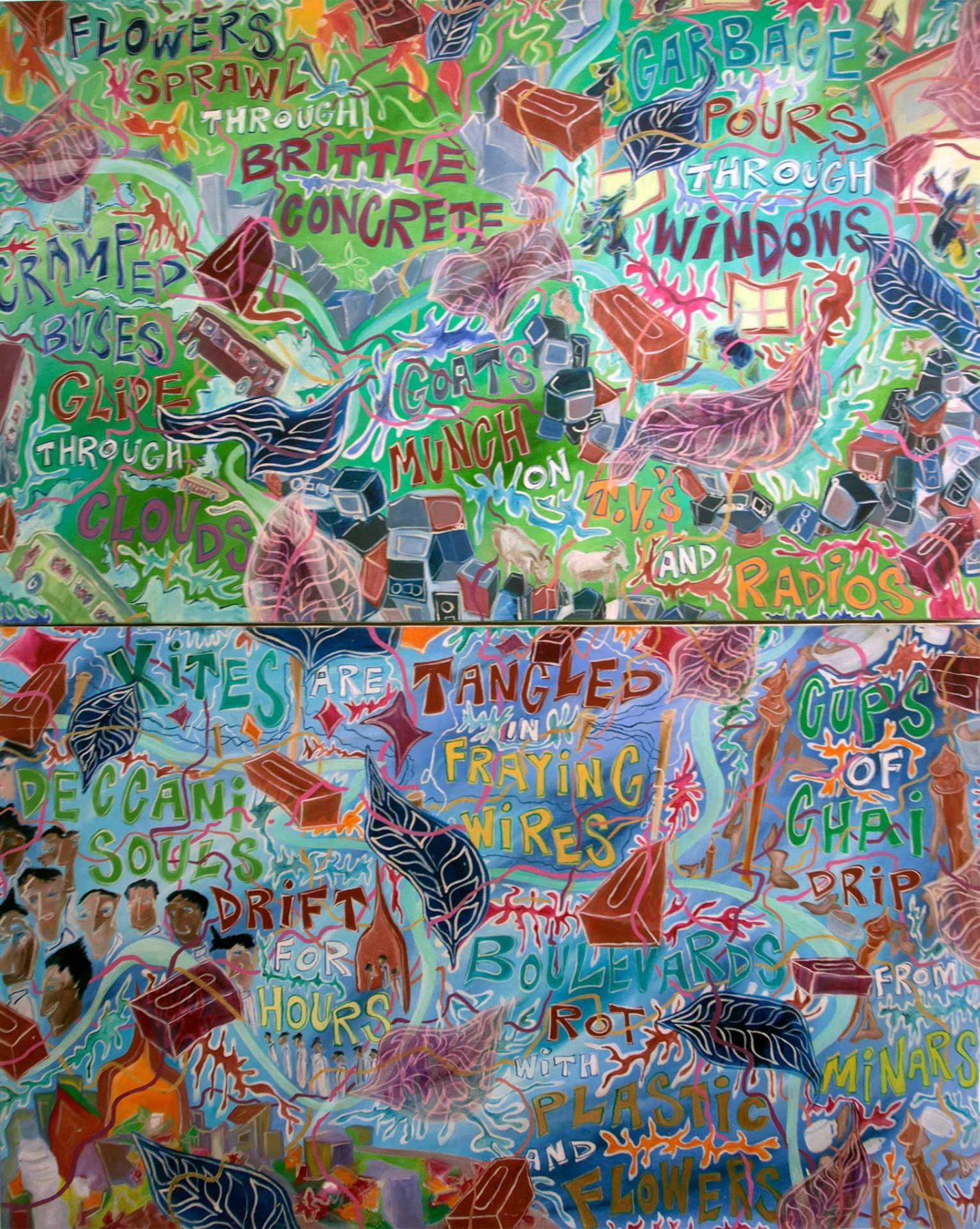 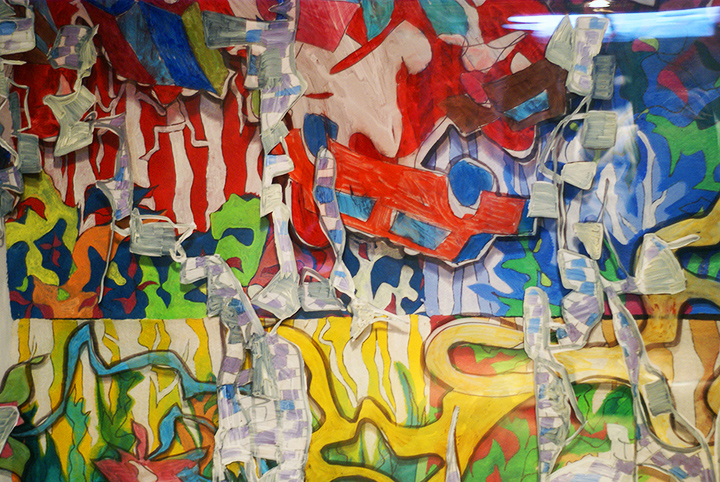 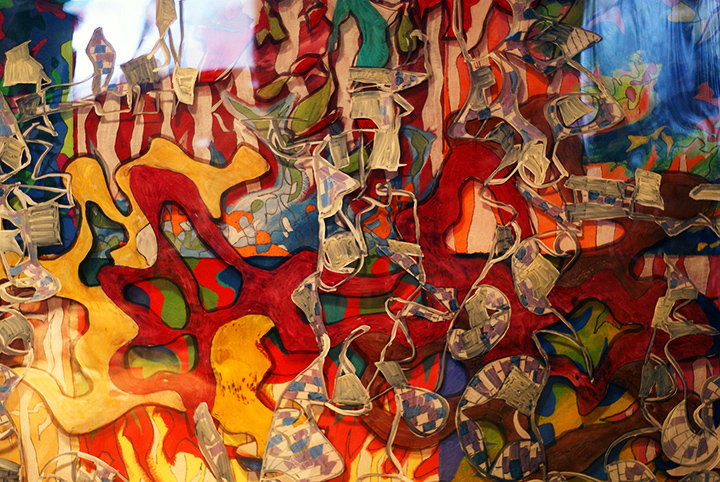 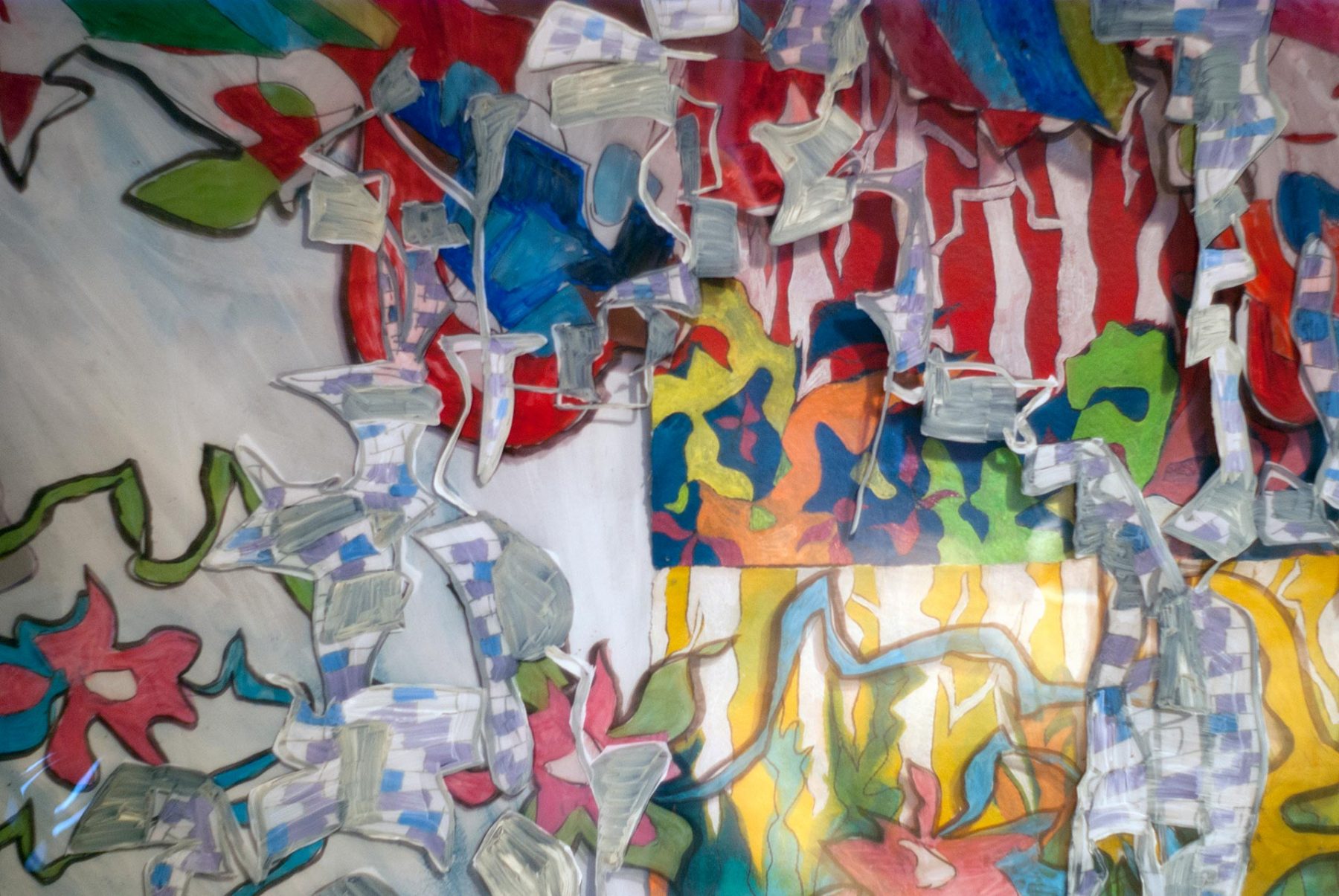 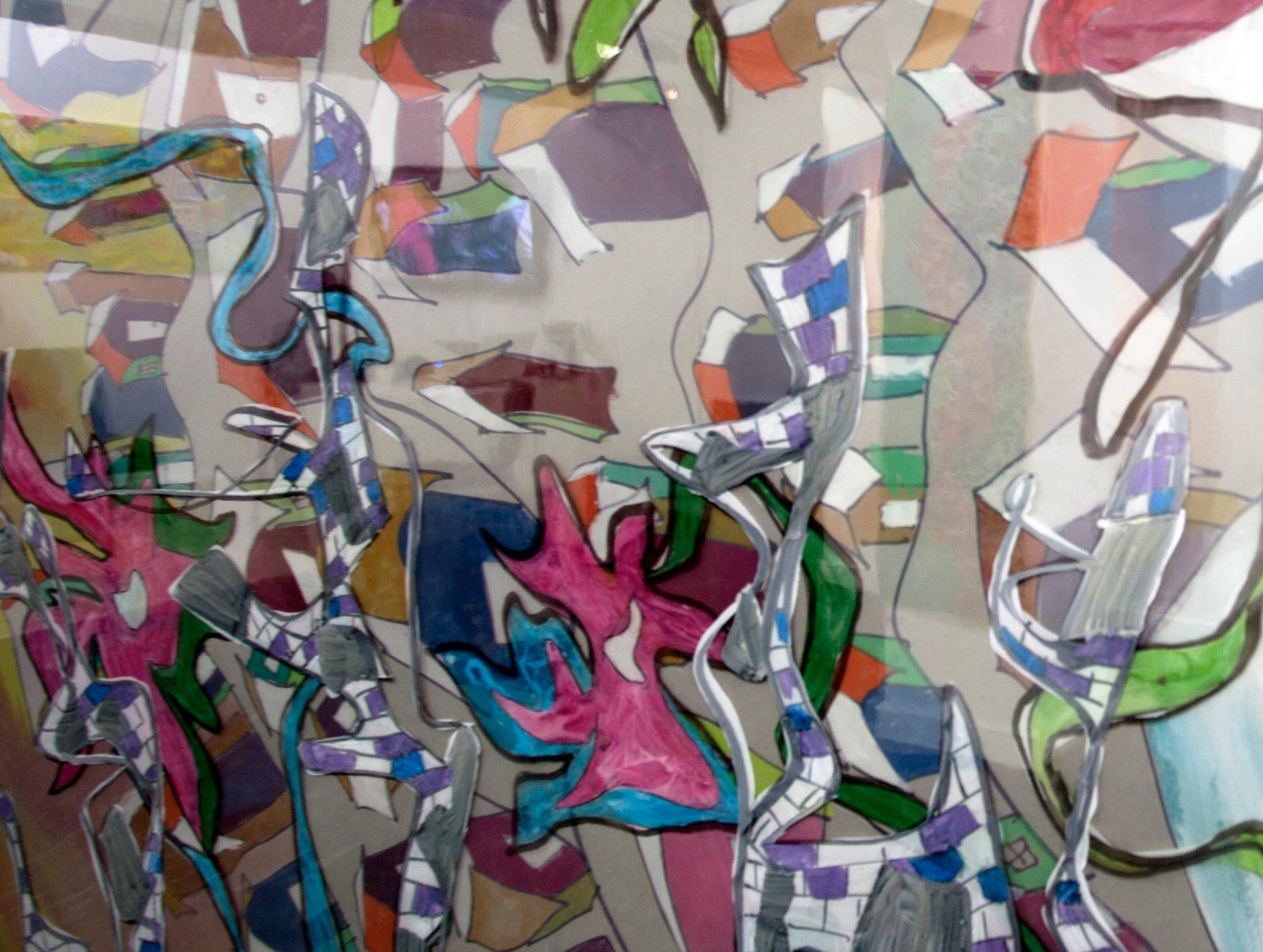 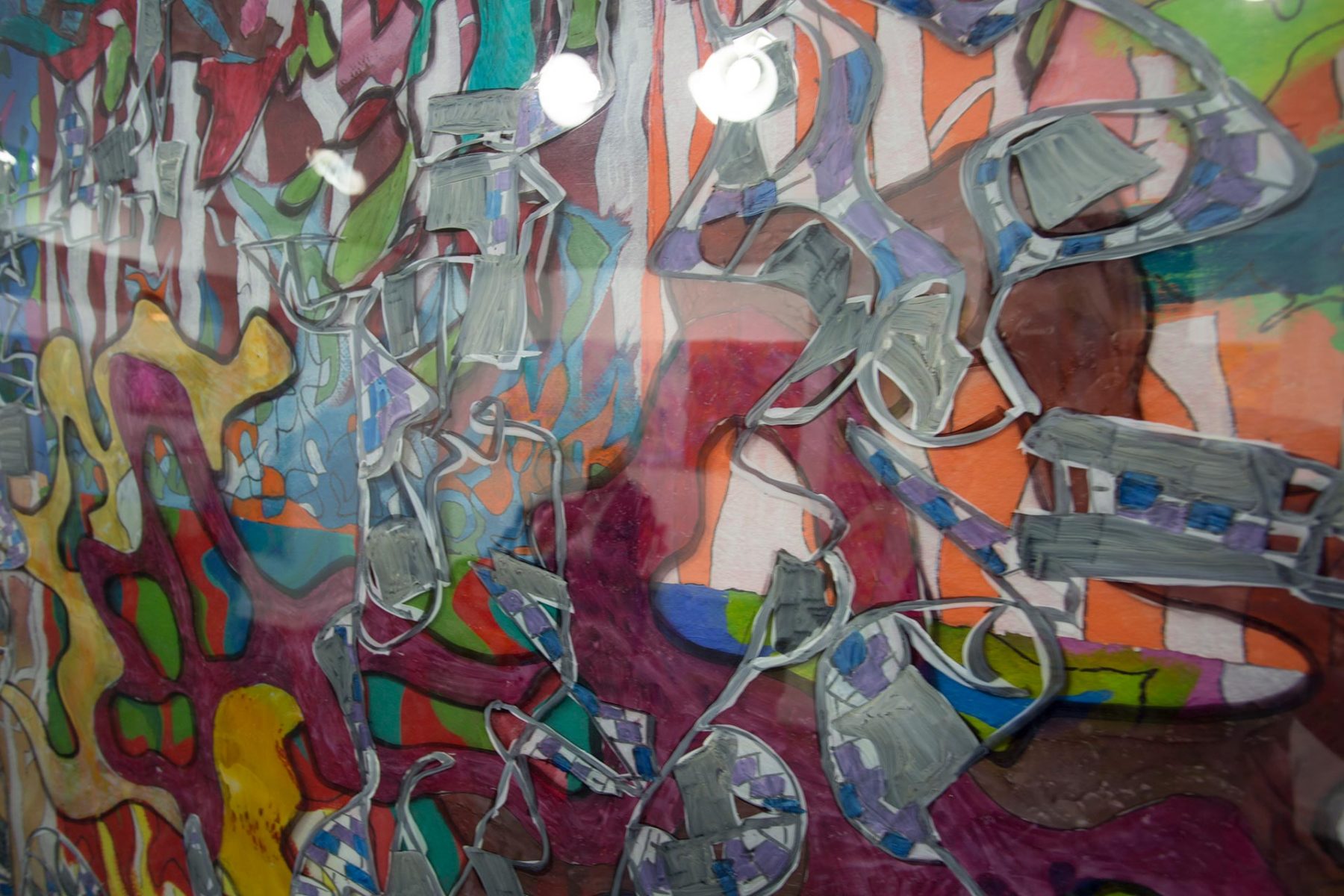 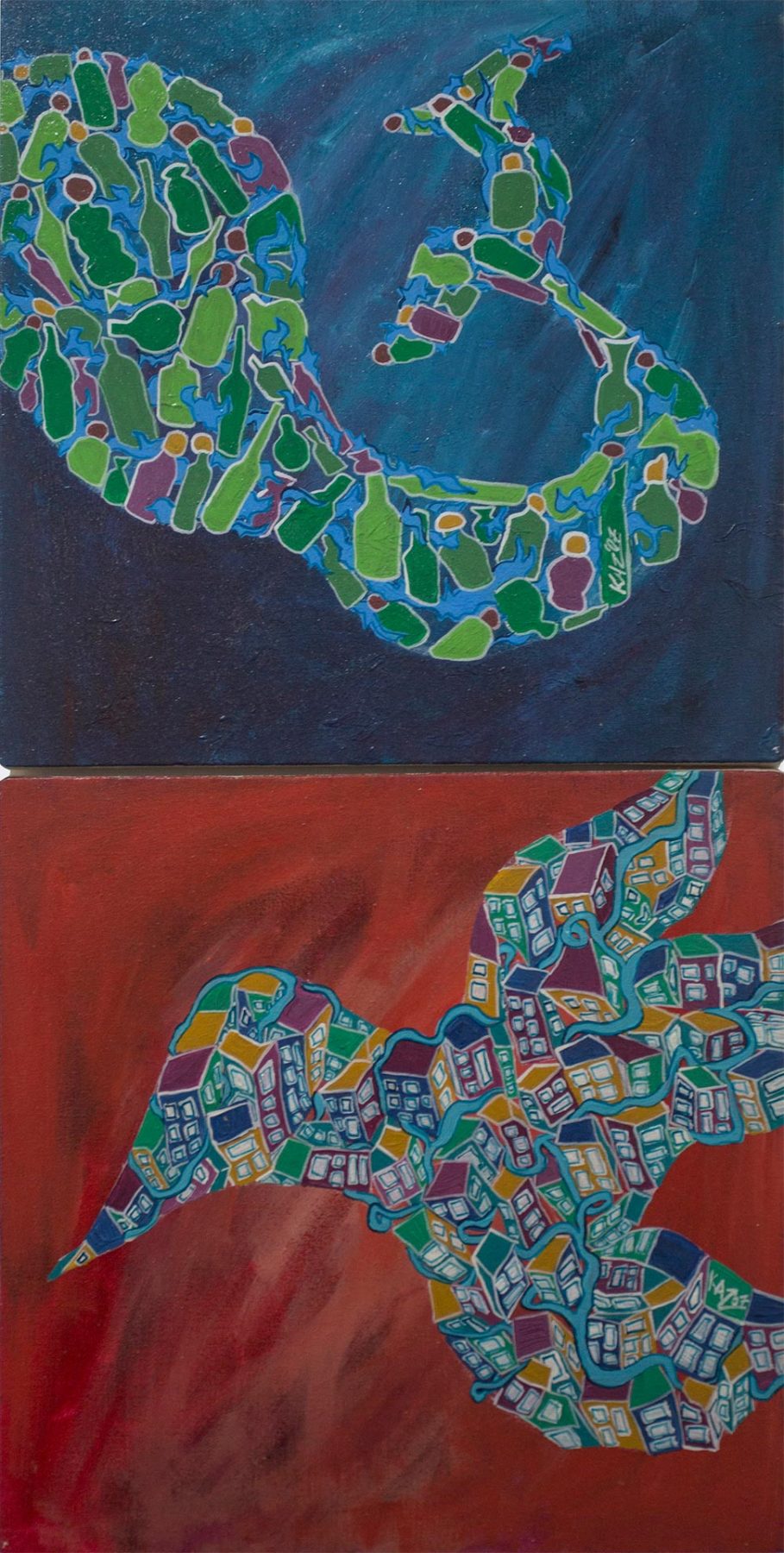 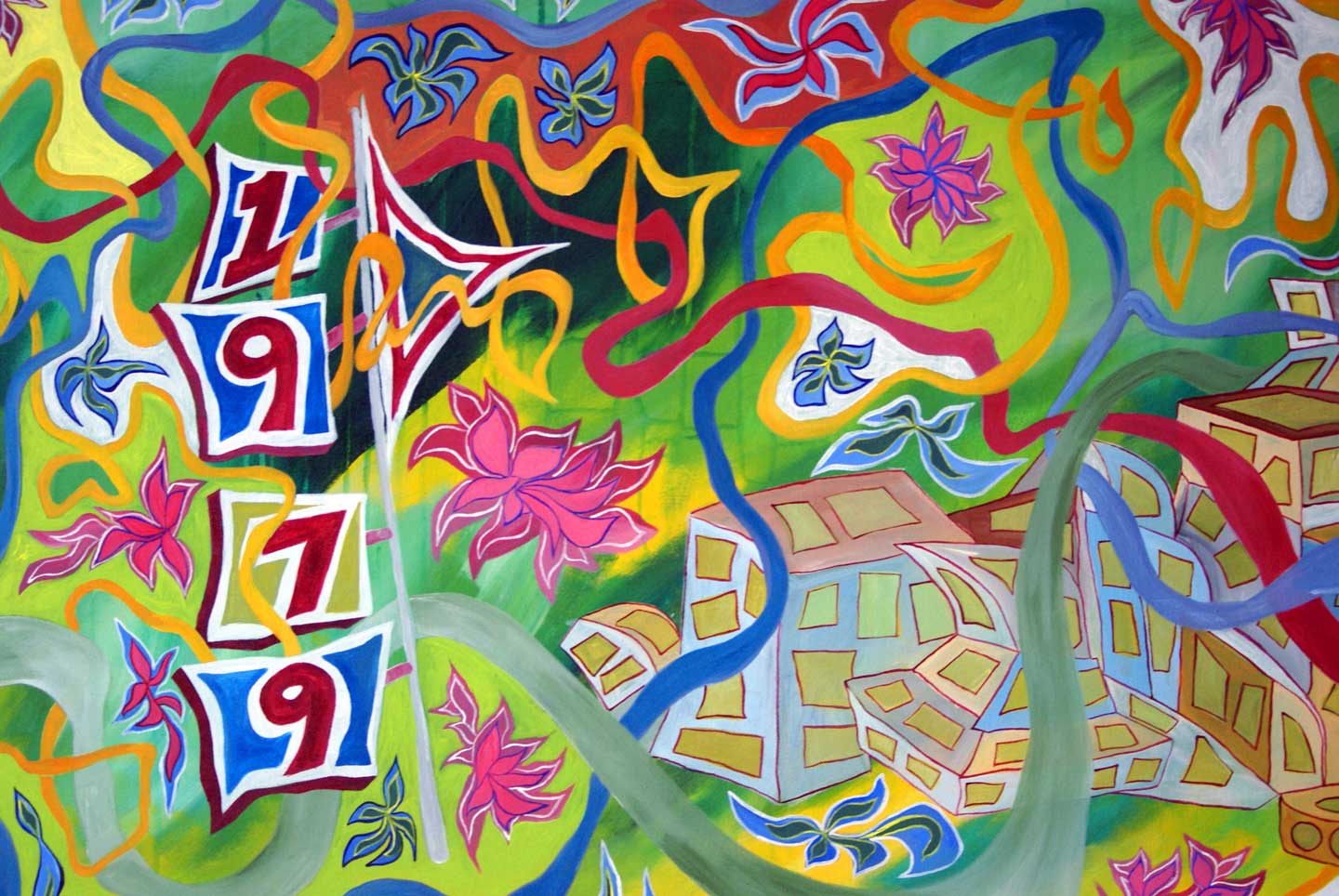 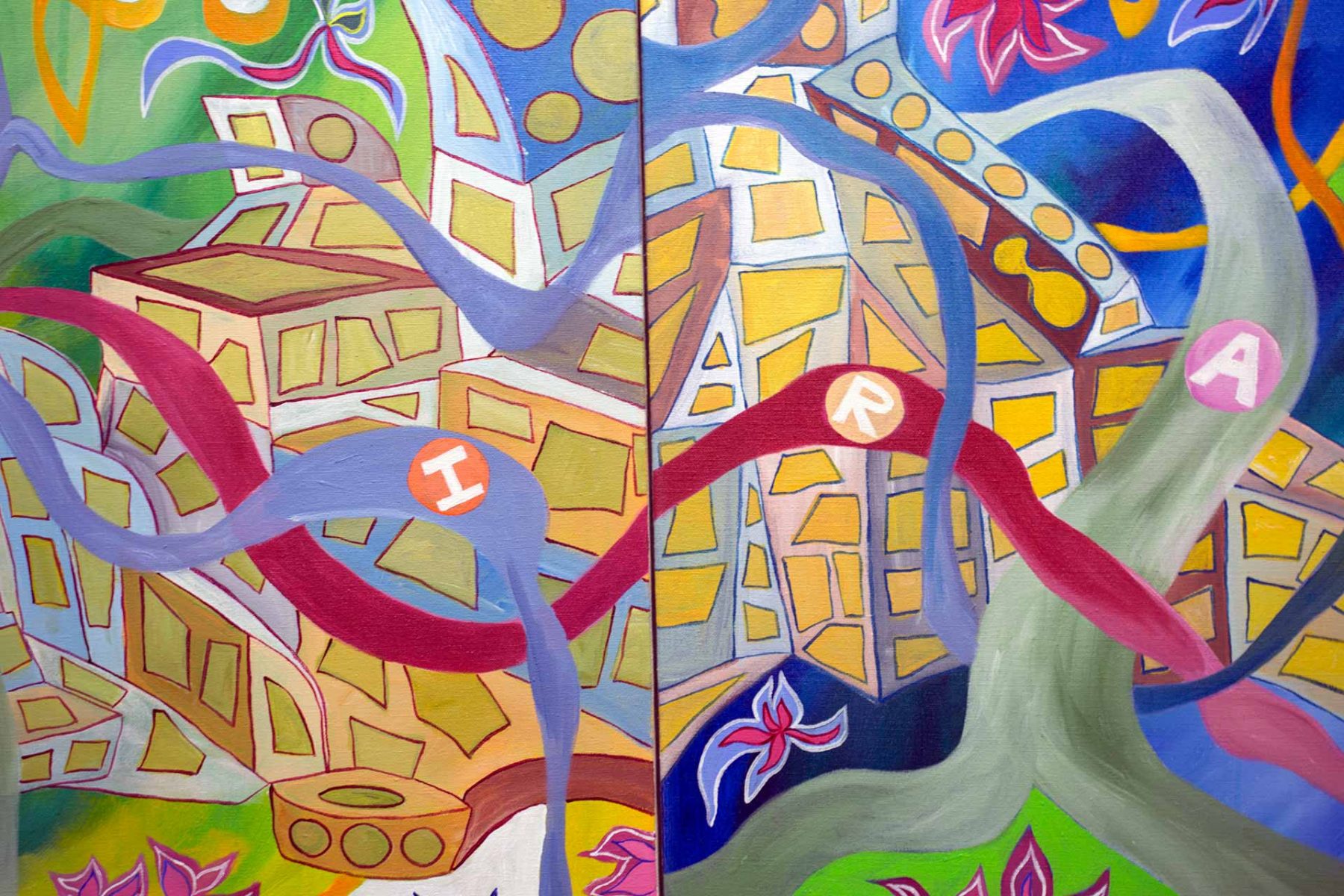 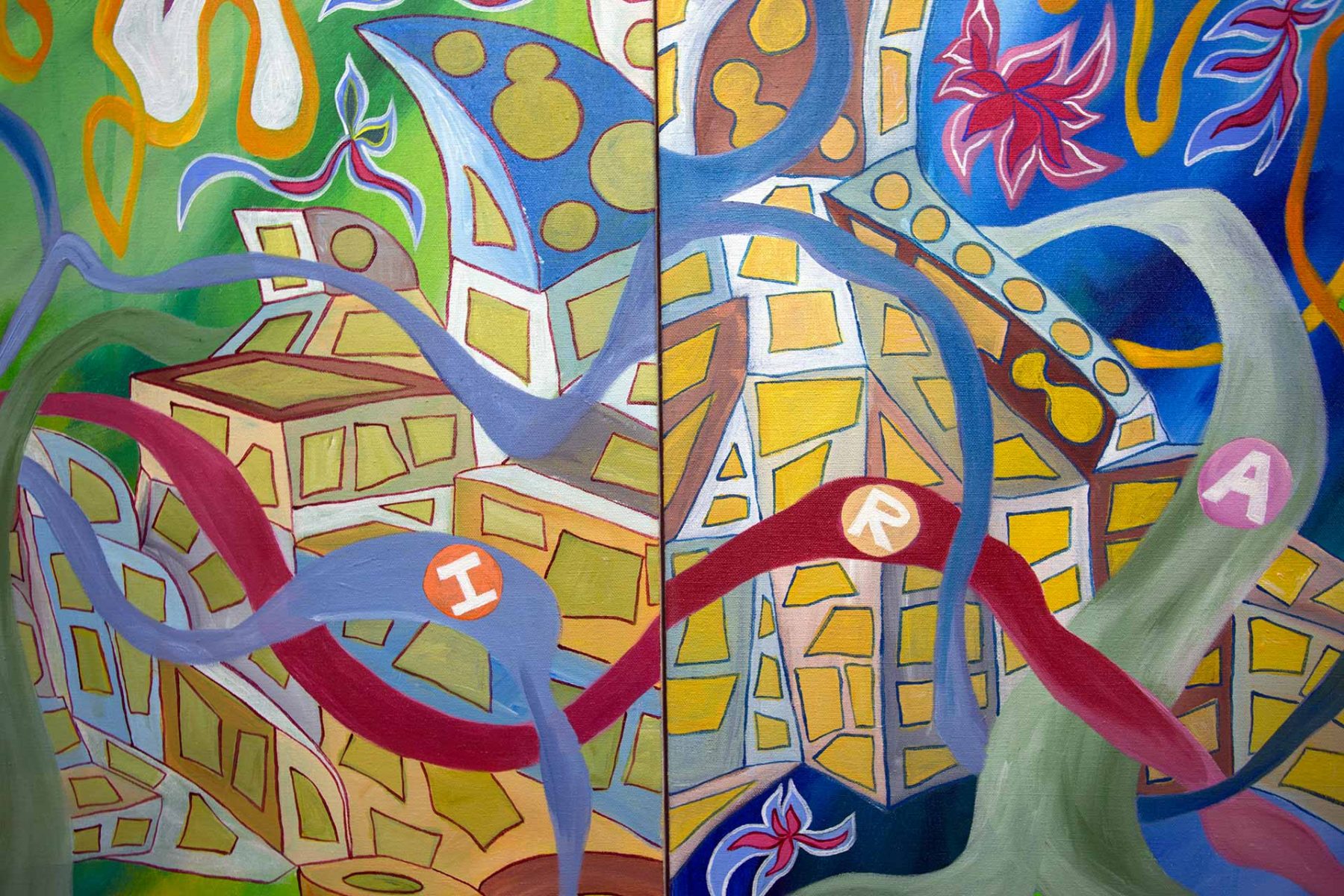 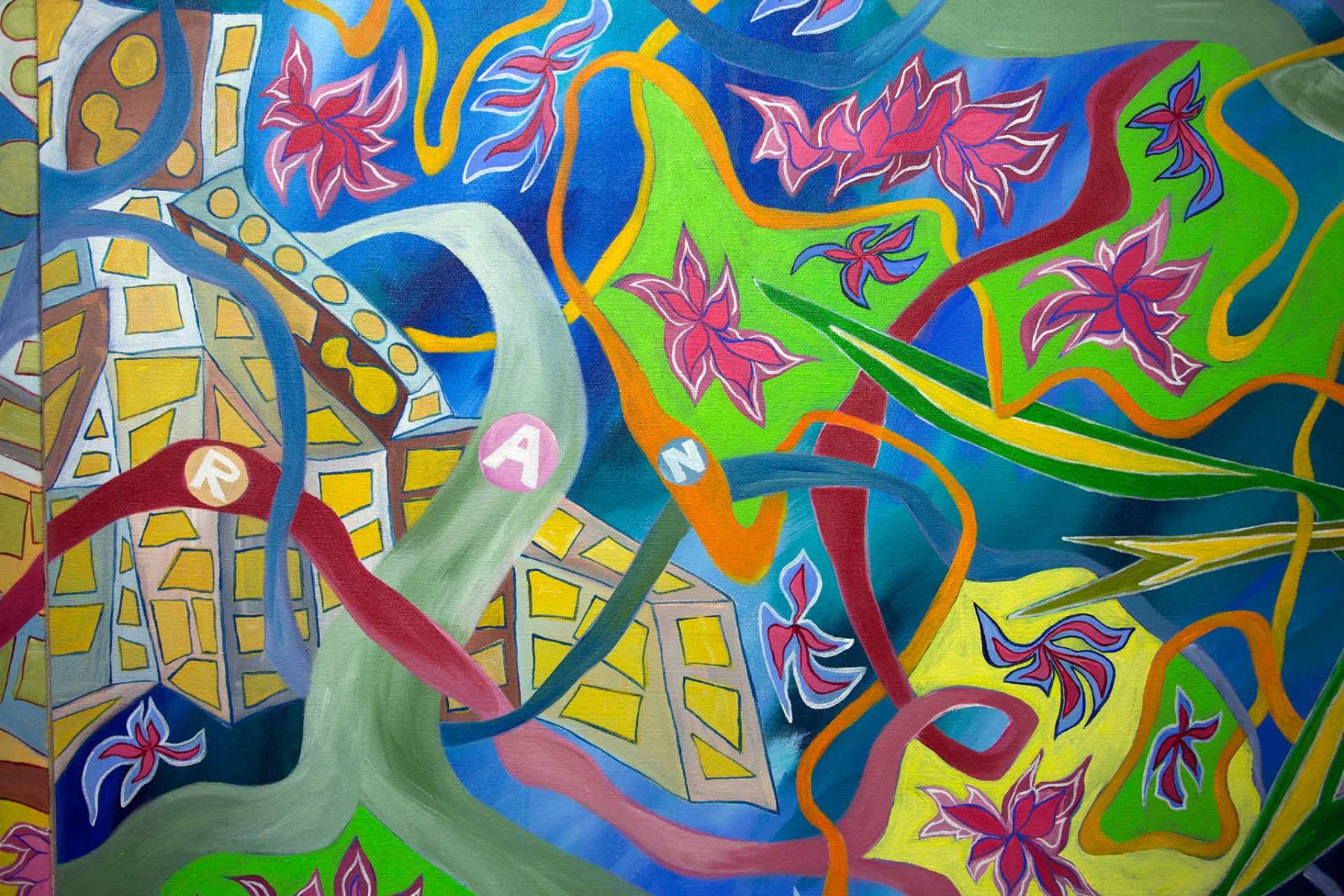 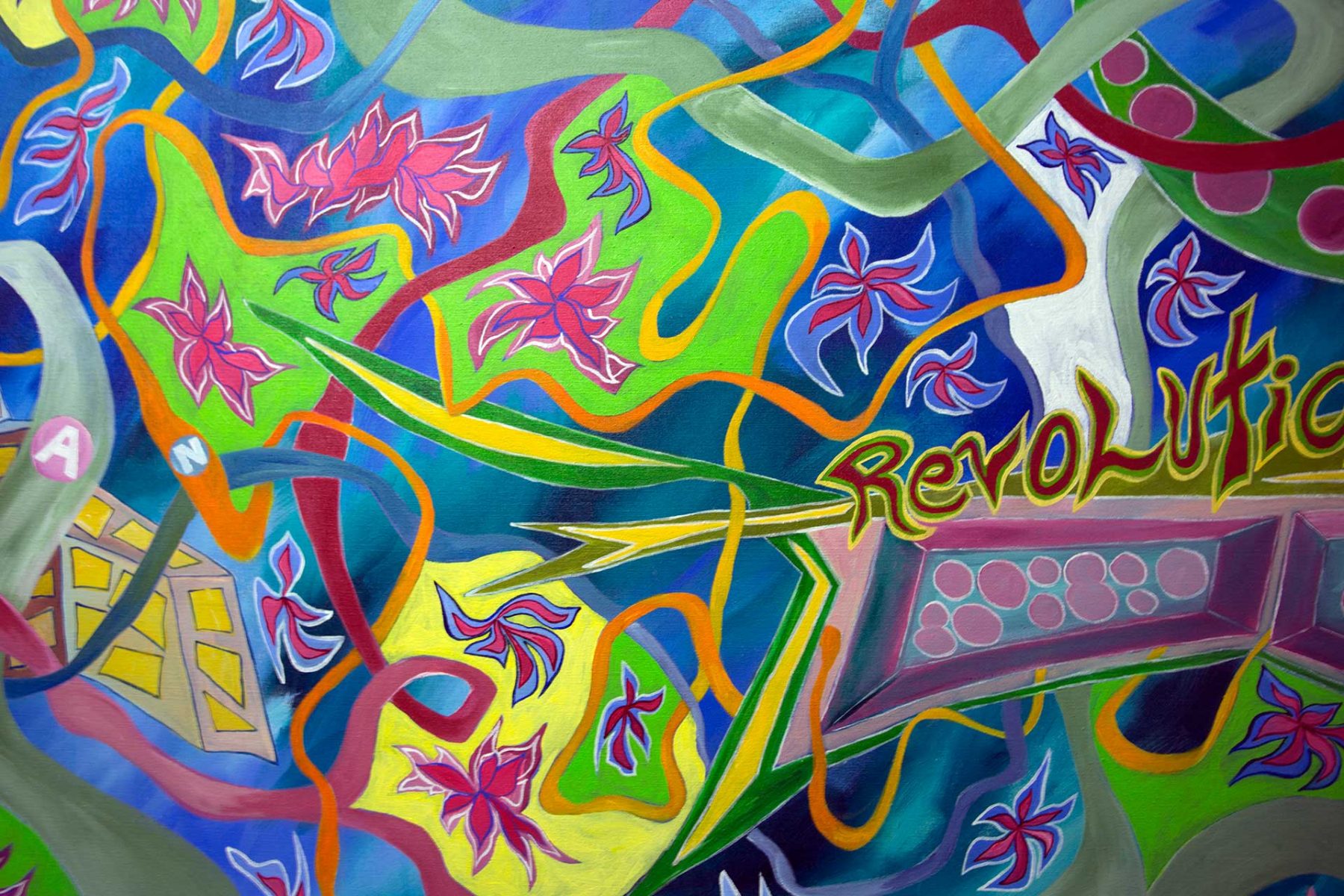 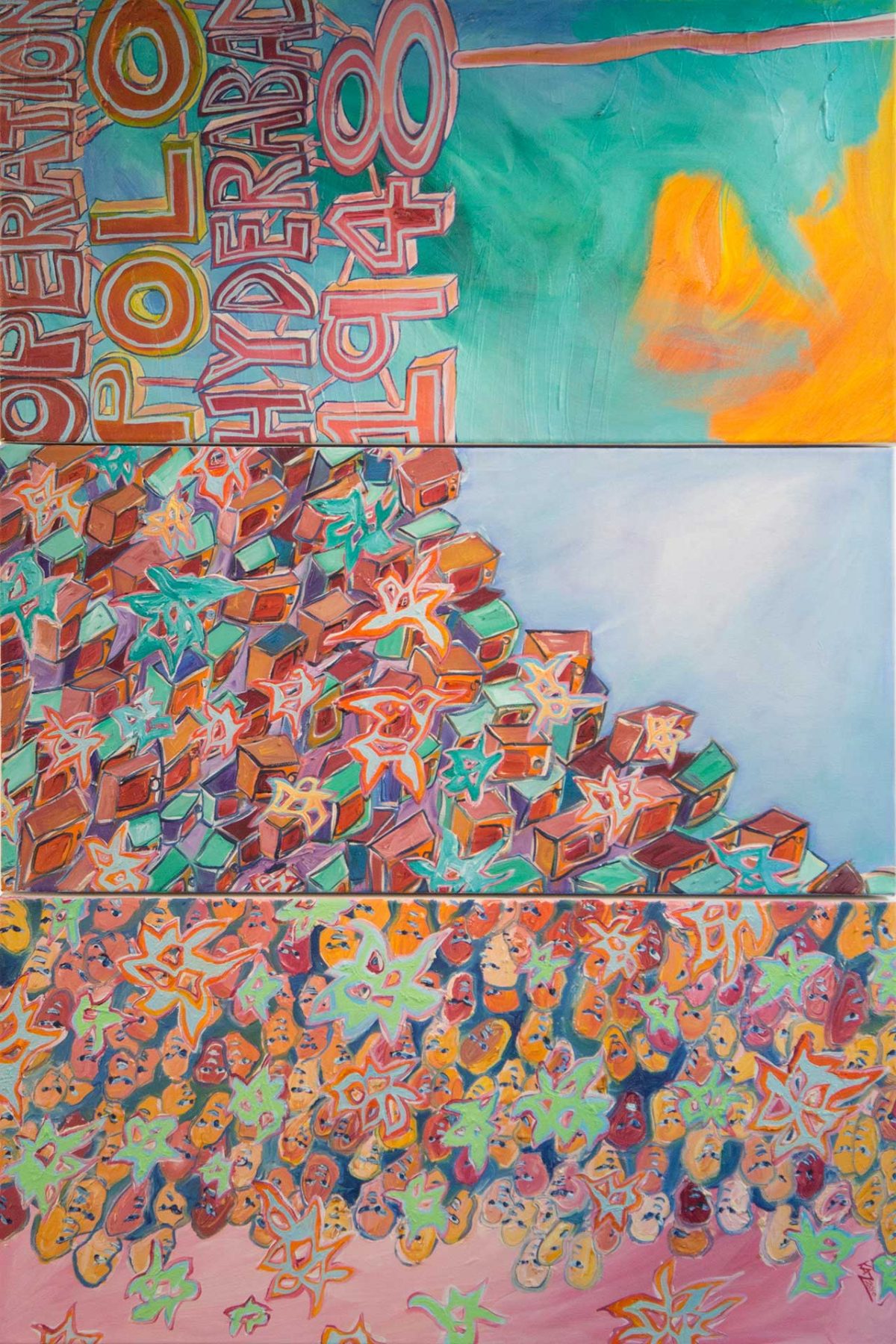 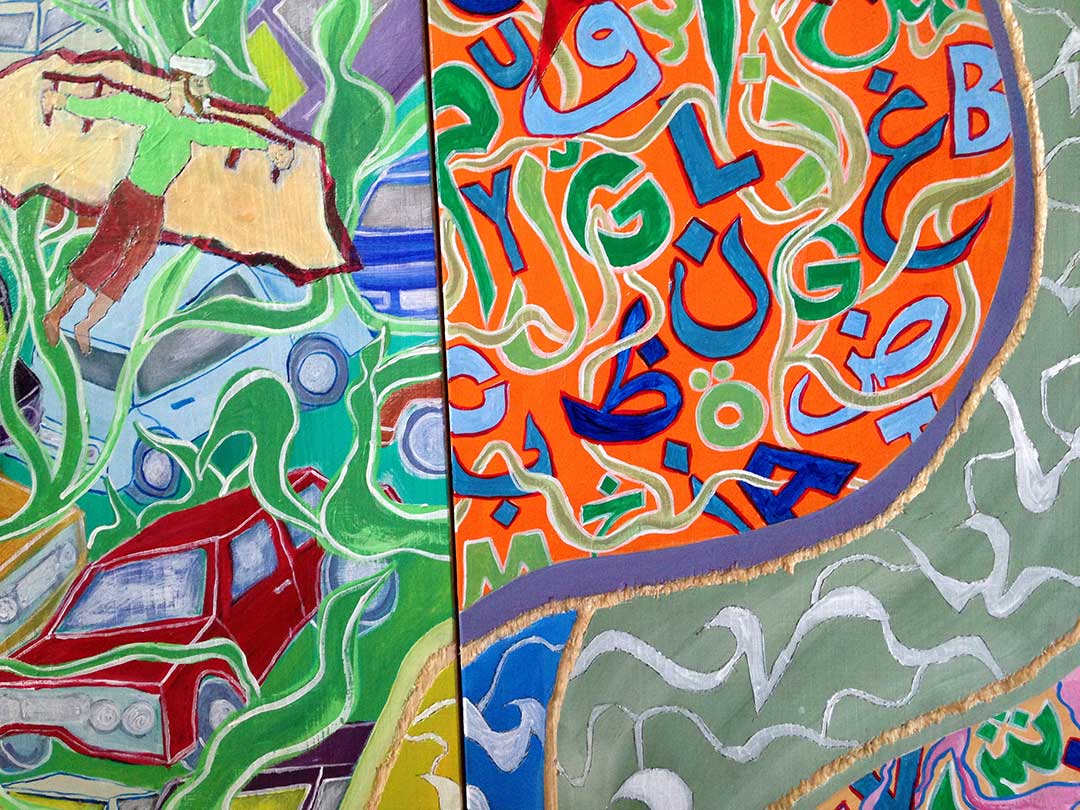 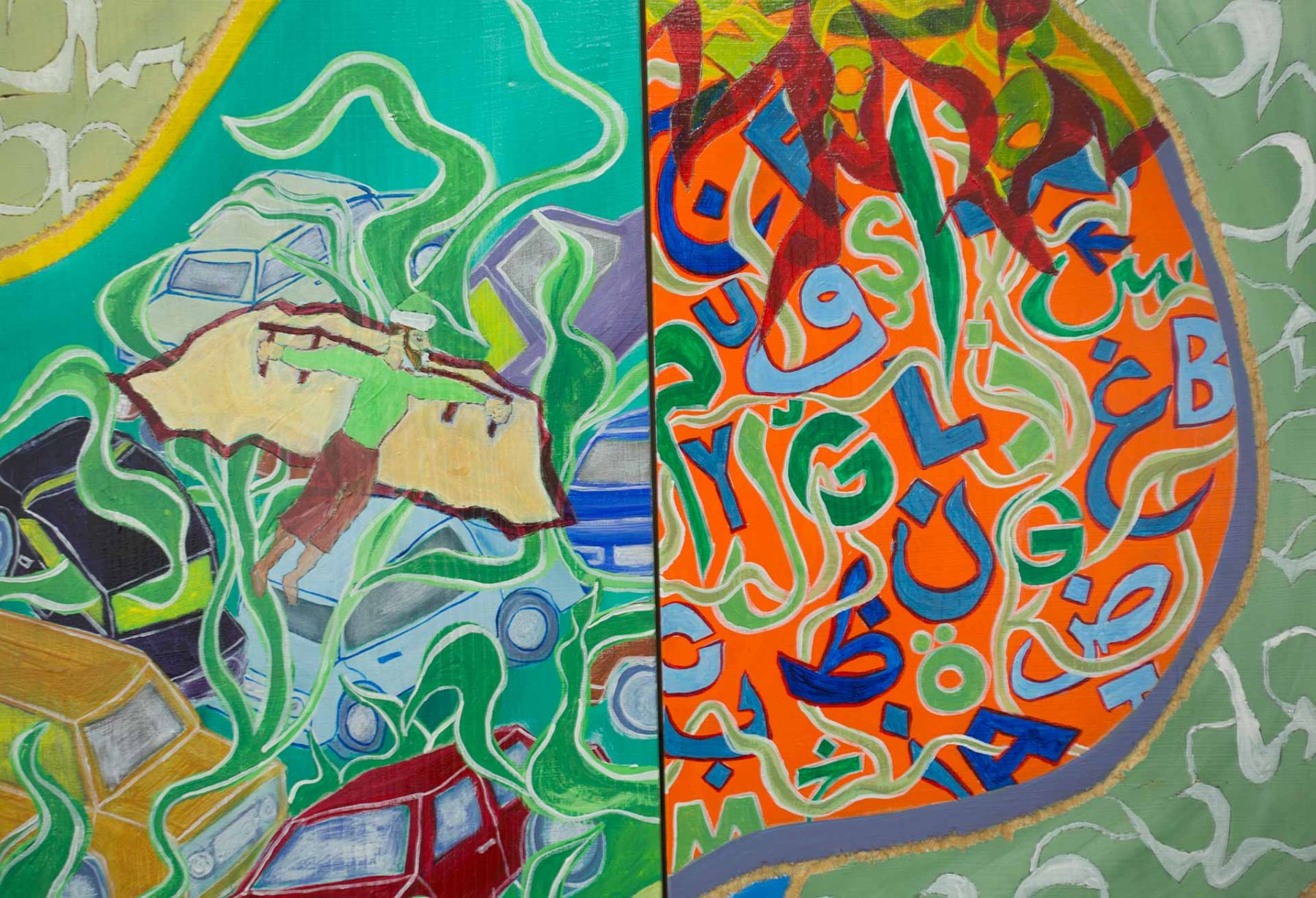 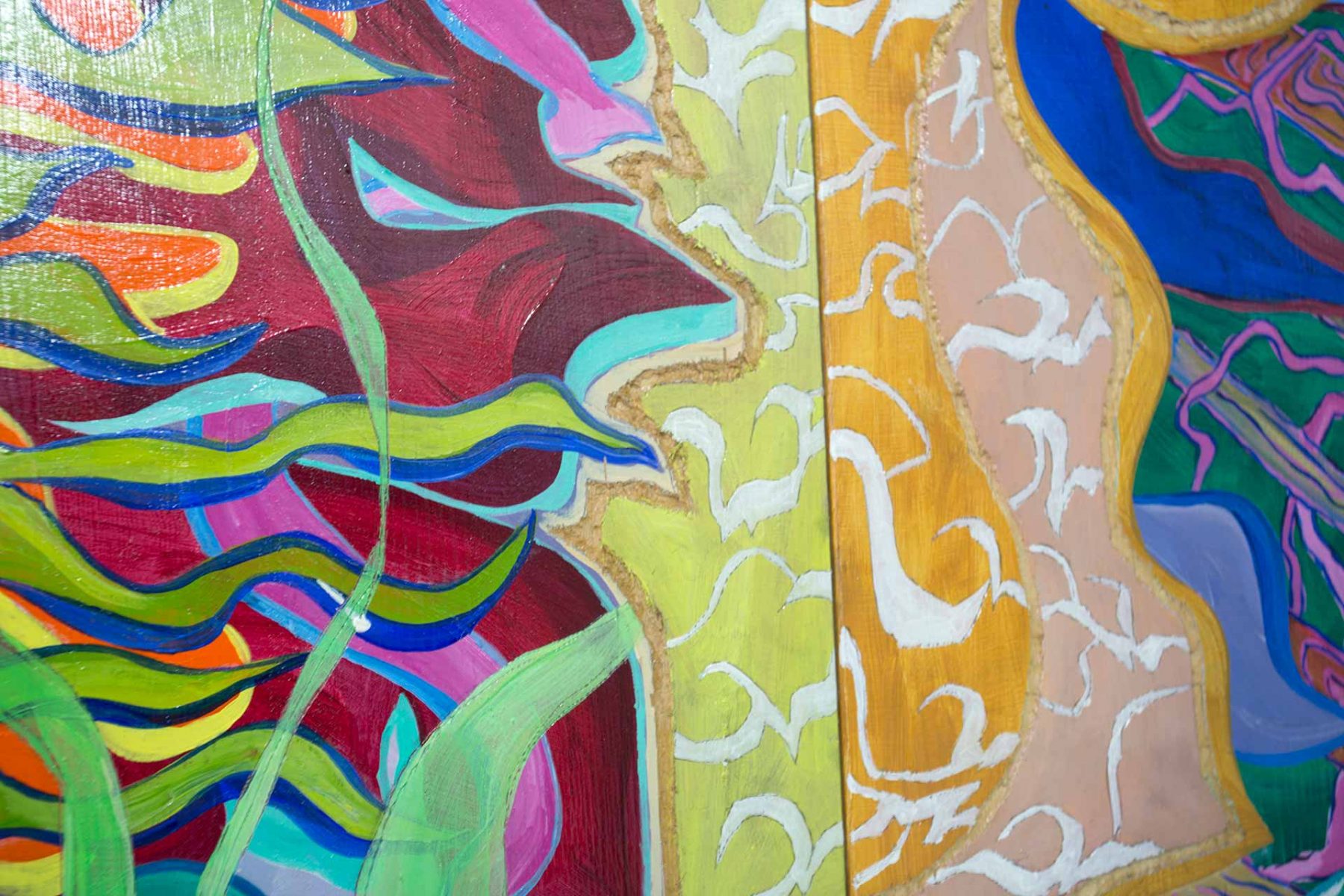 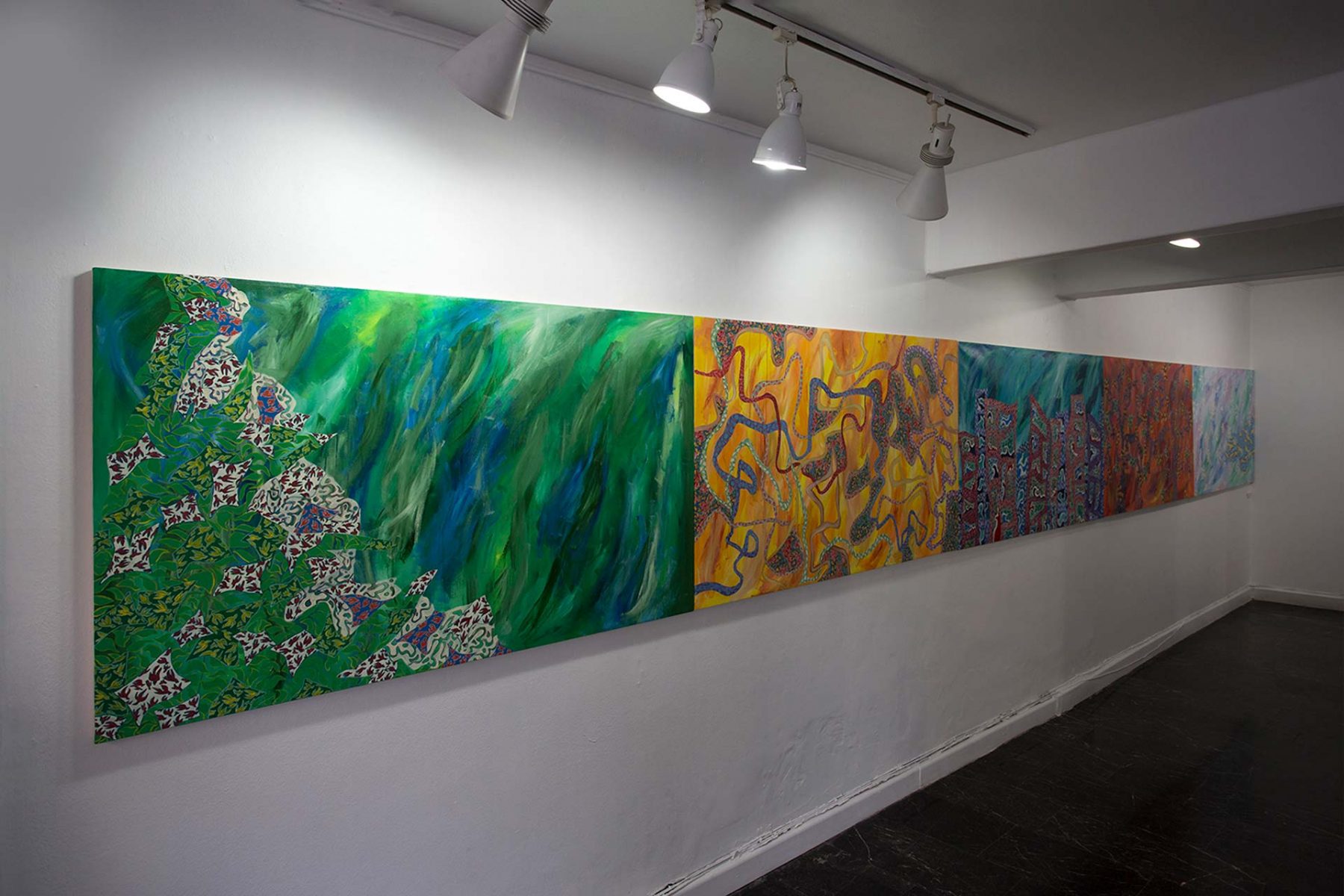 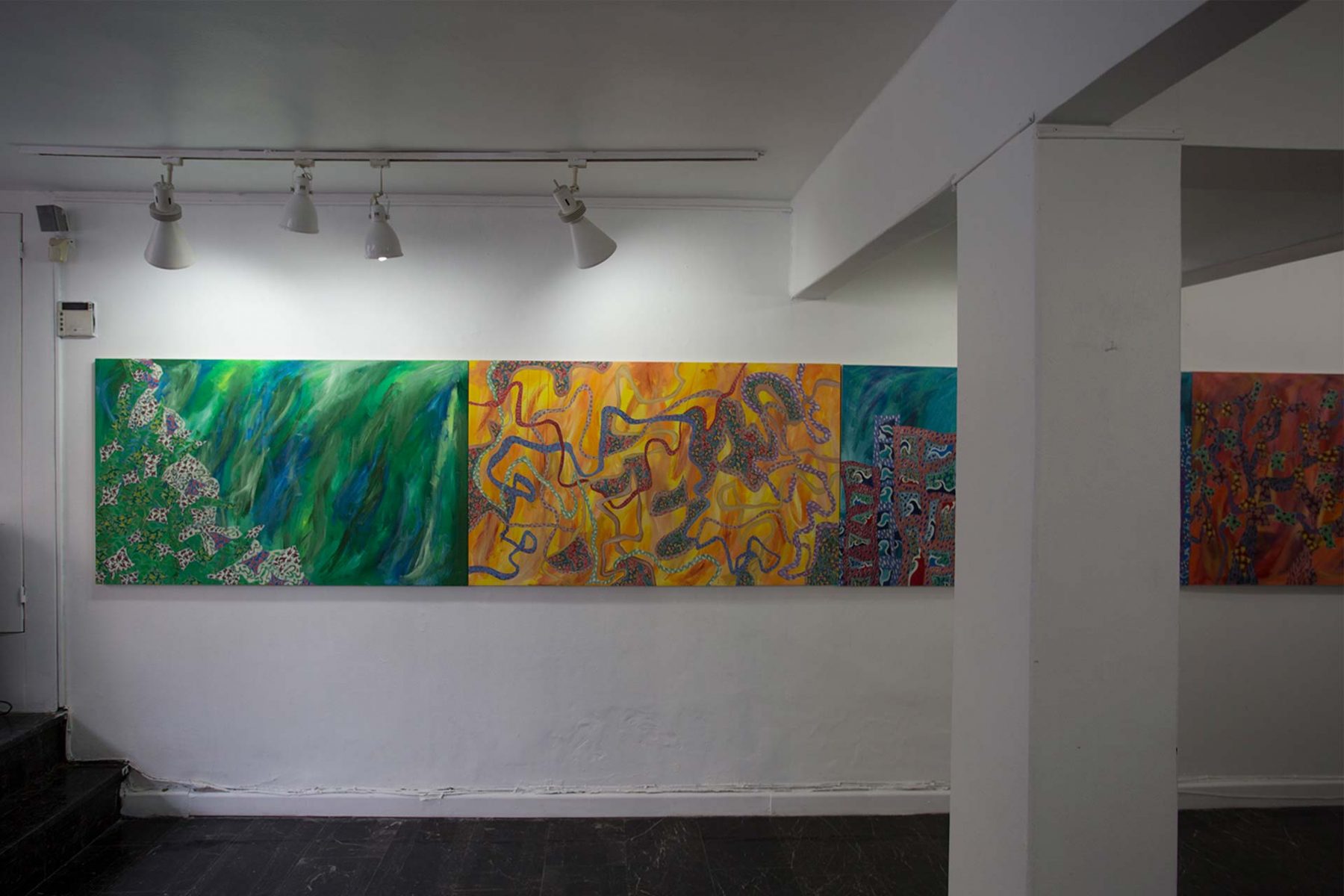 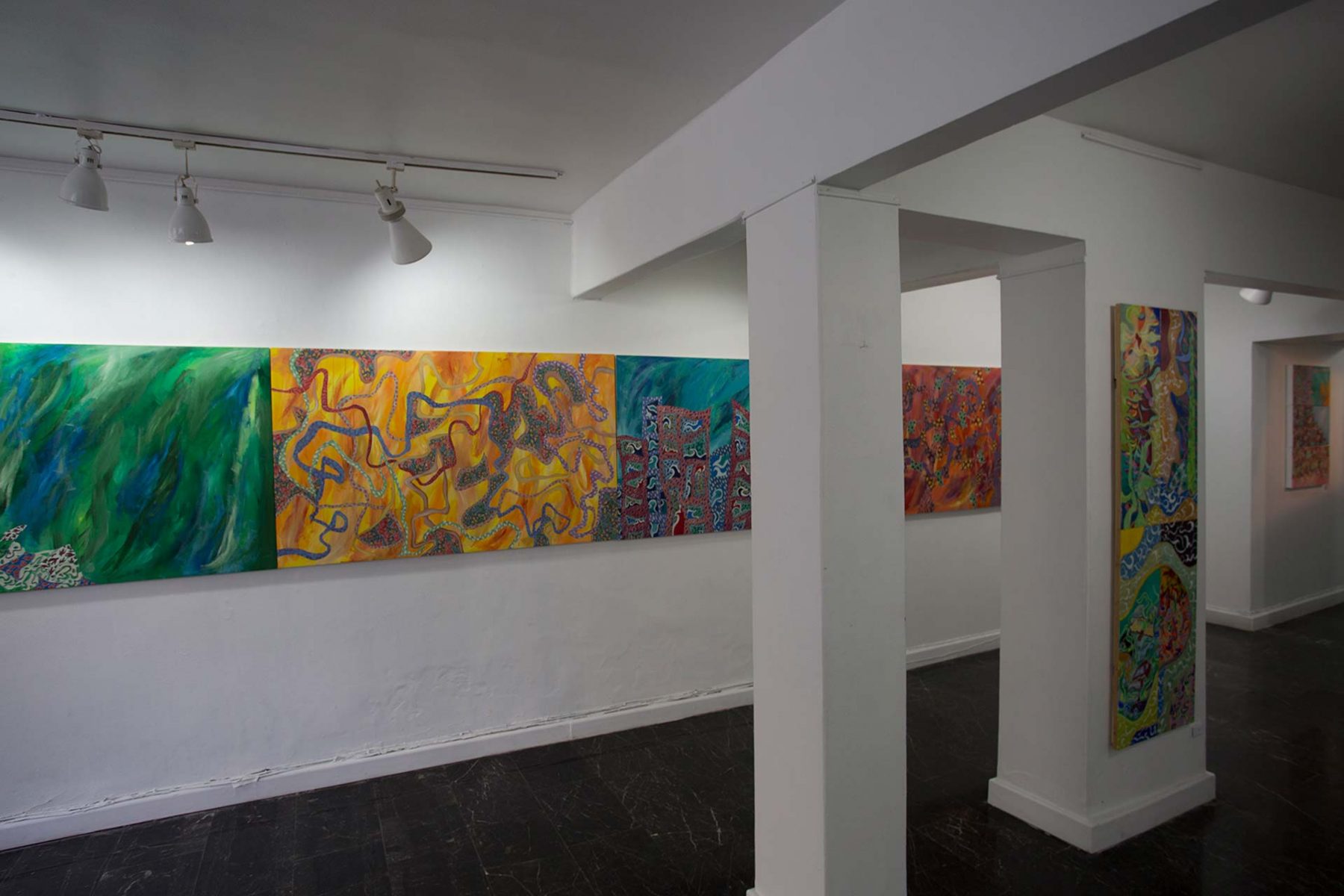 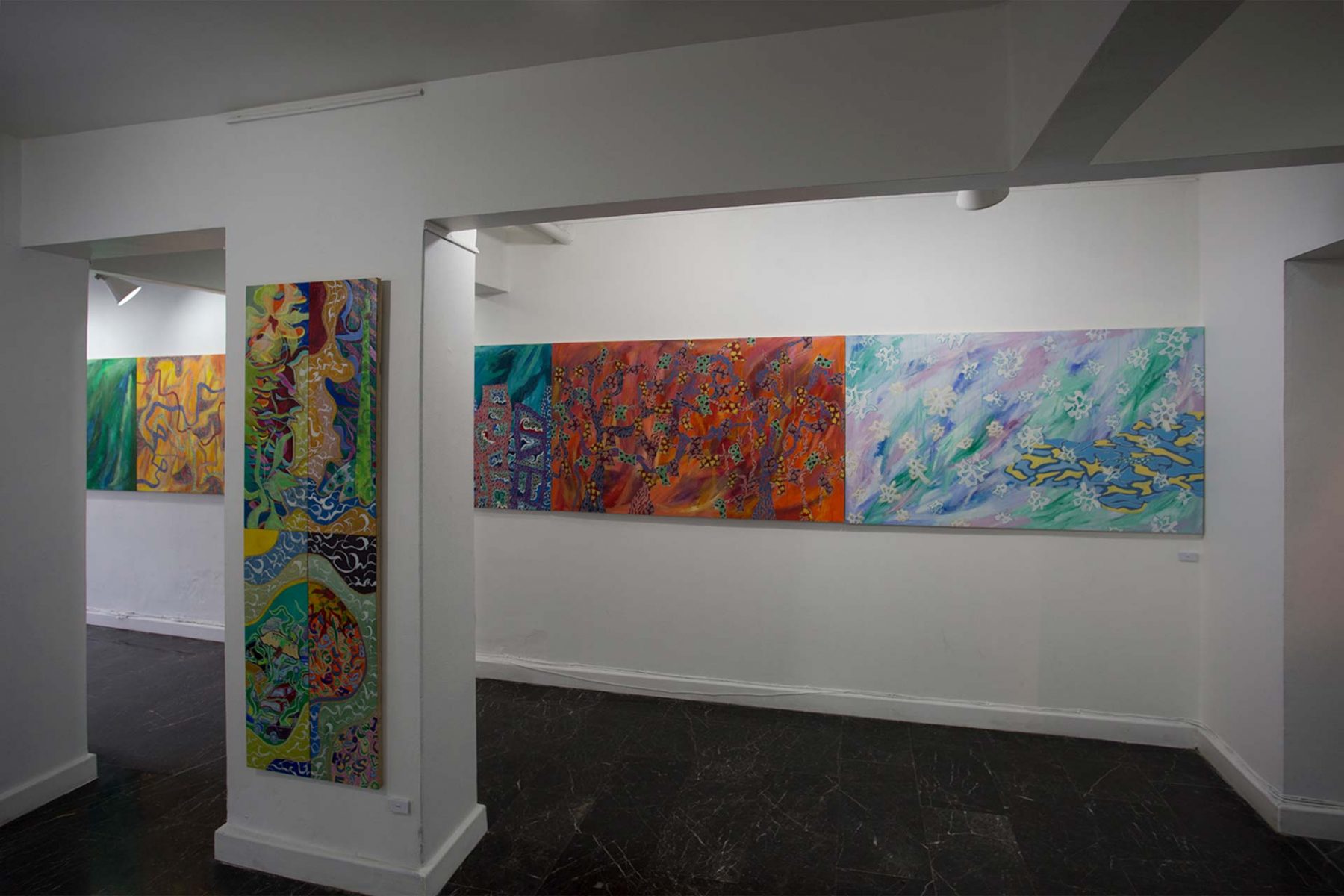 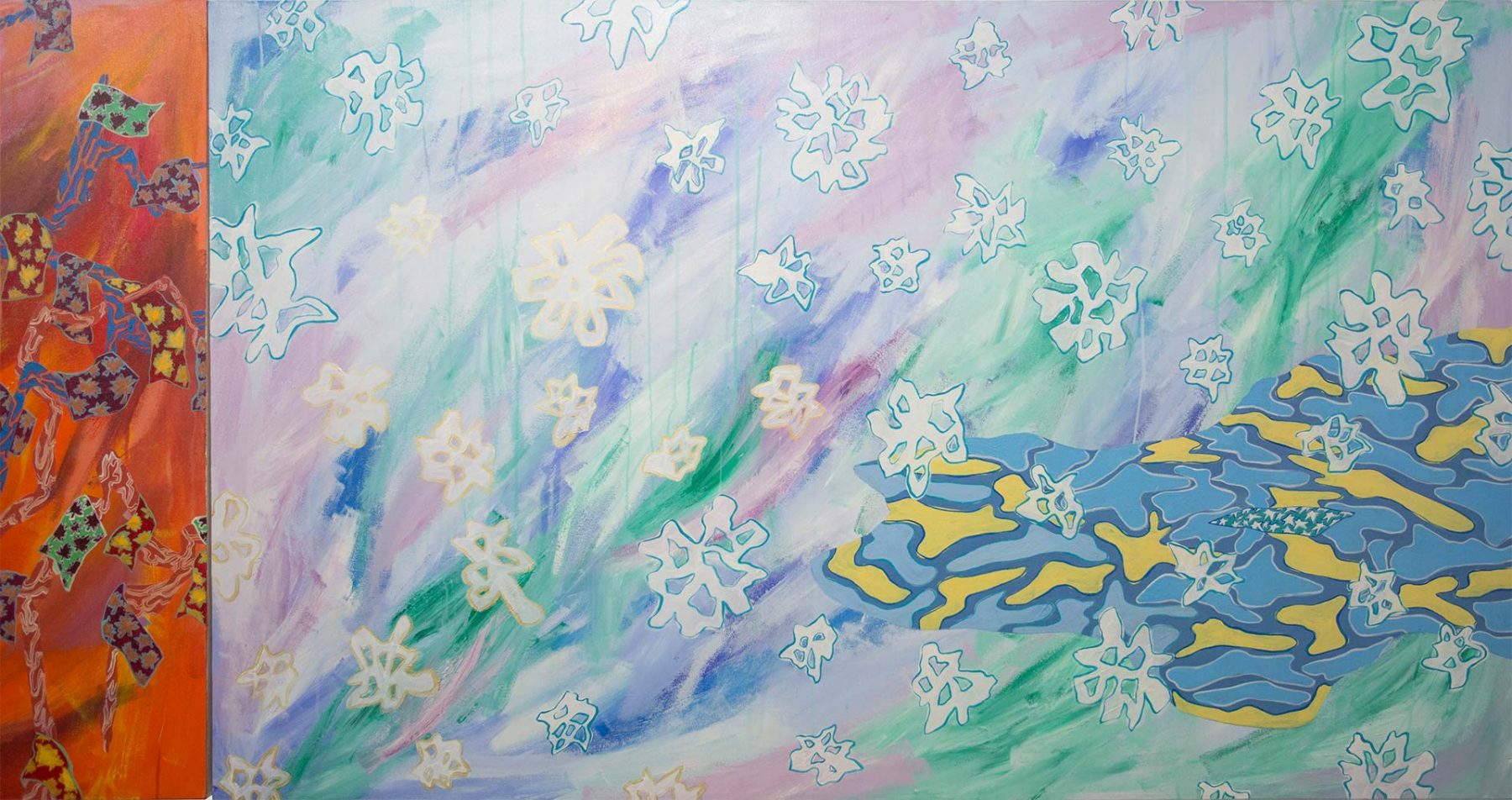 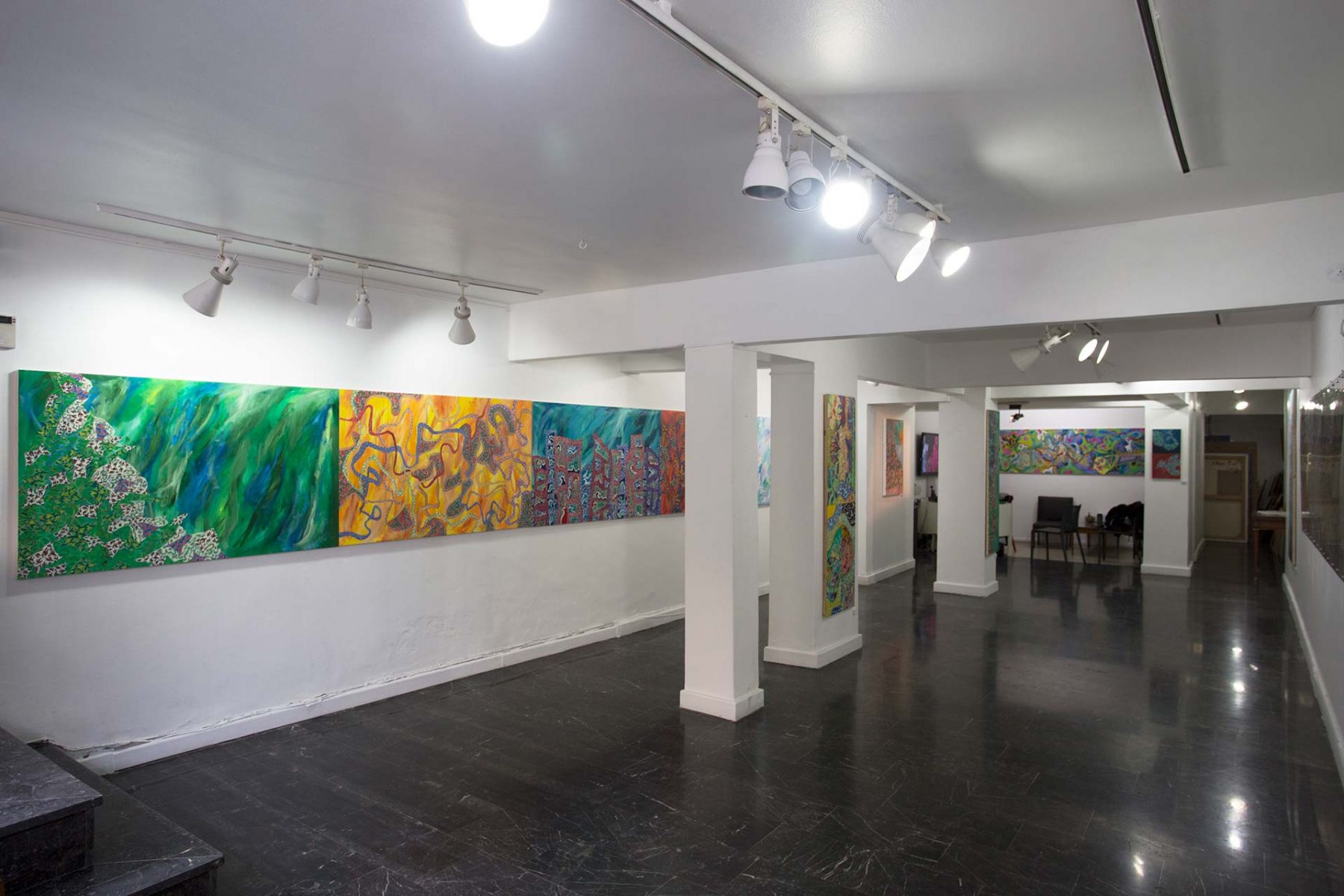 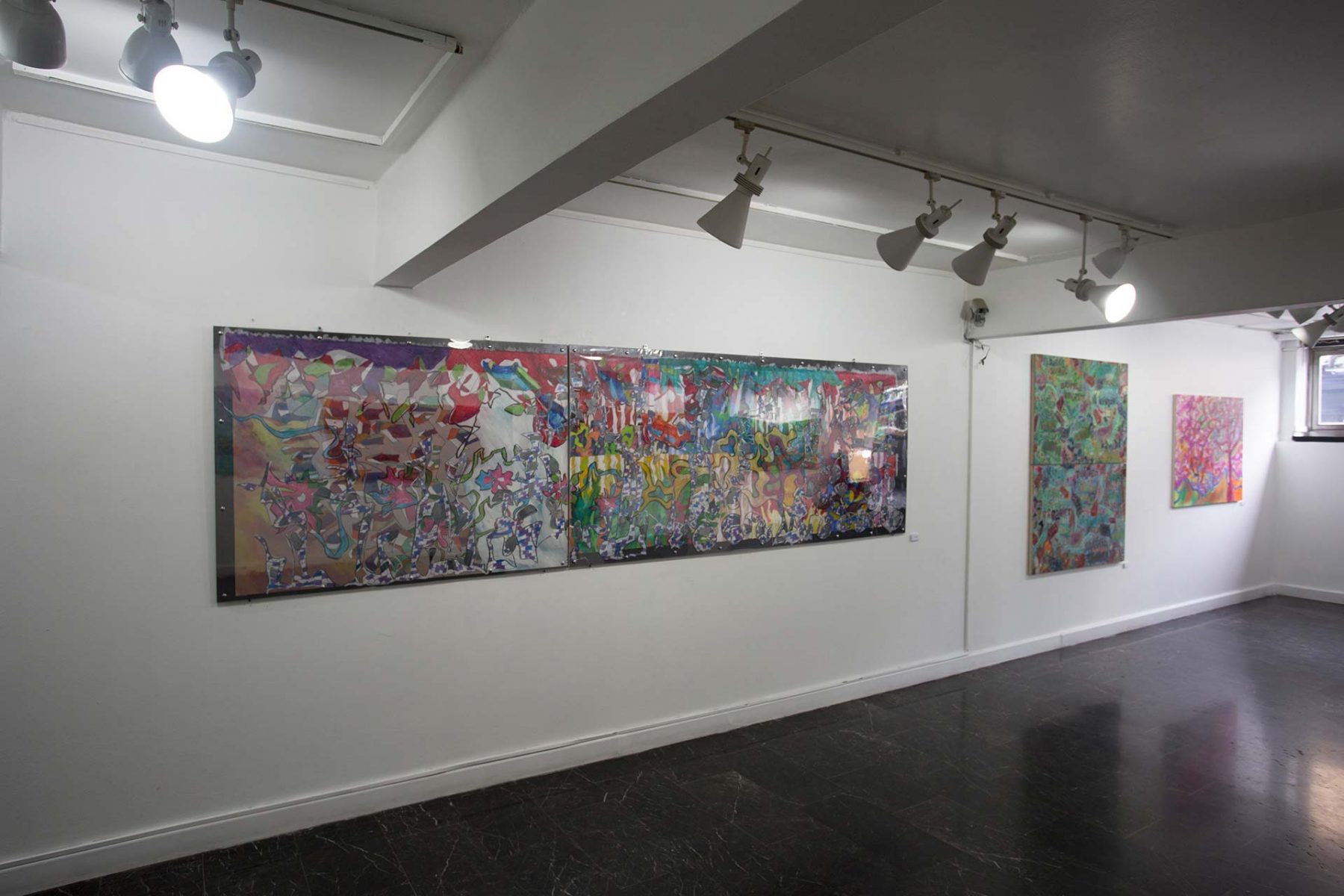 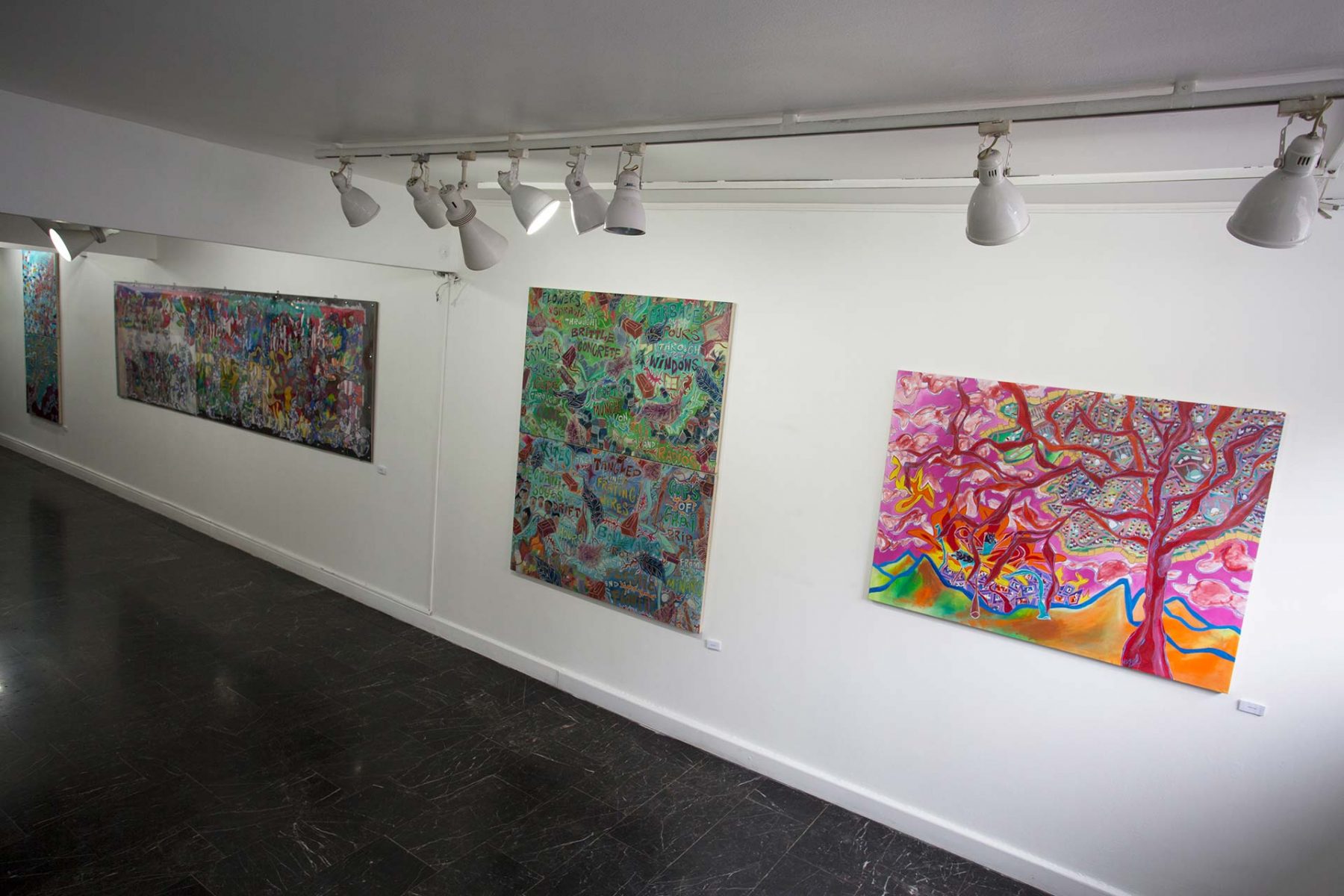 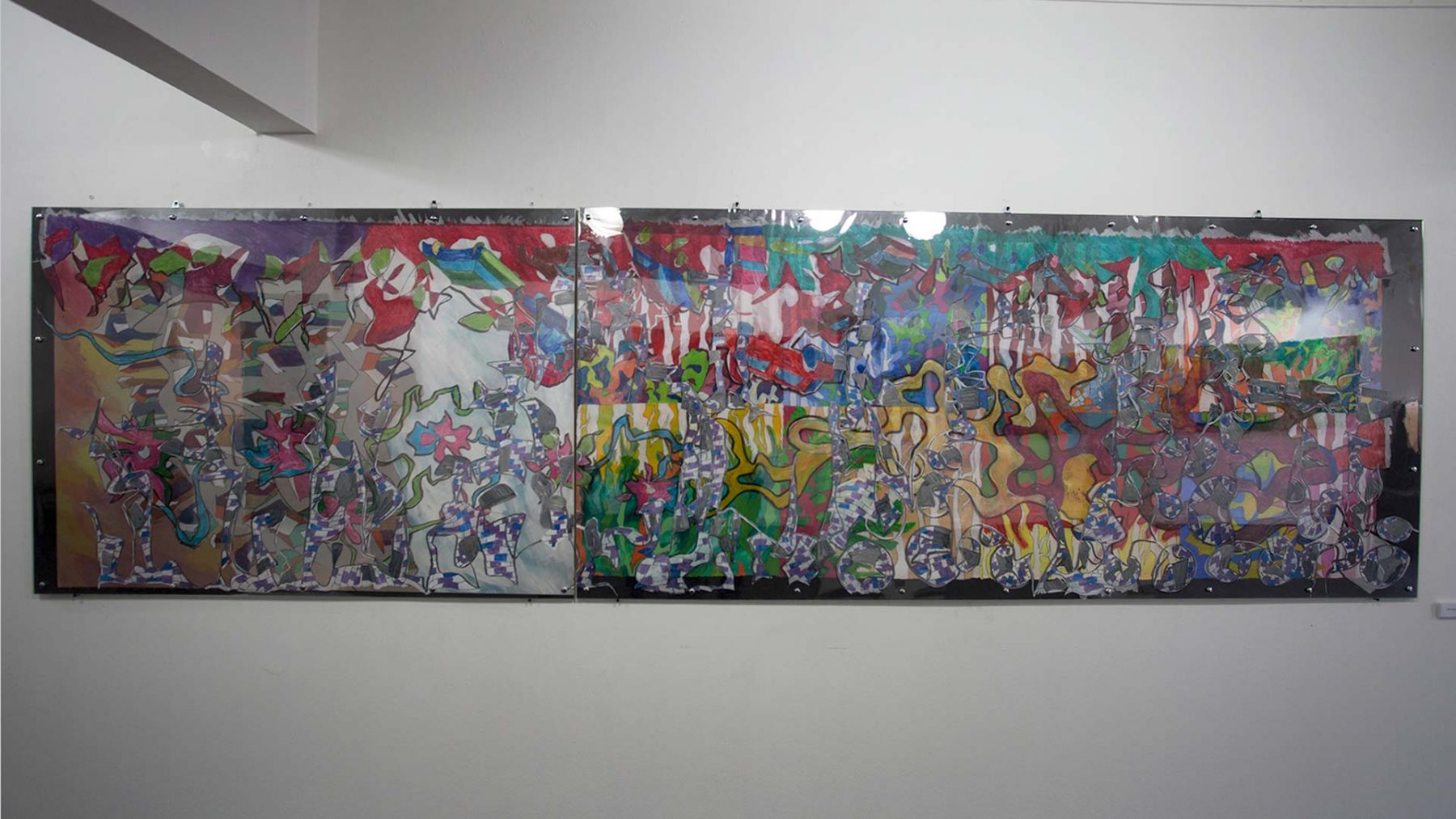 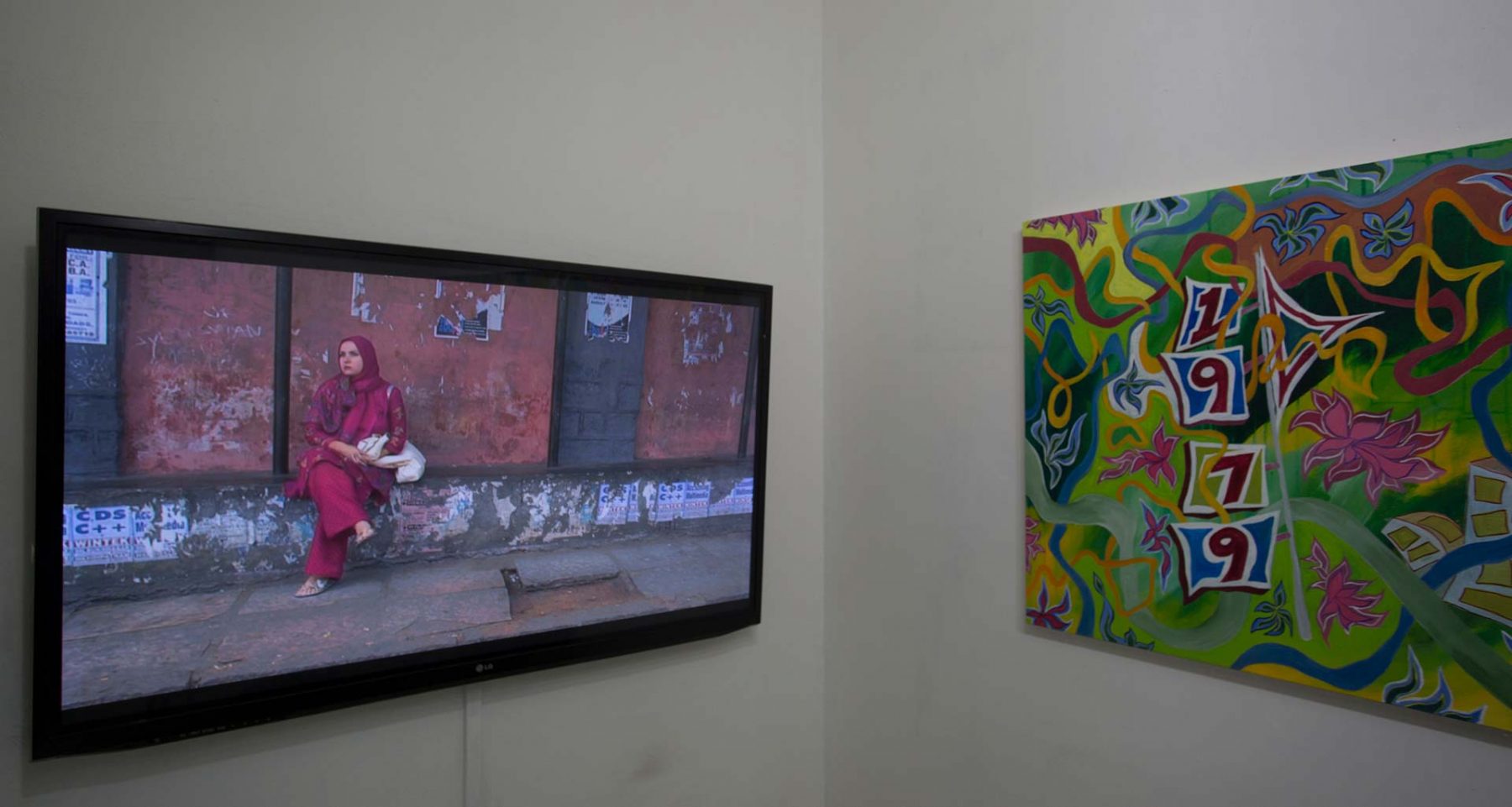